Three Ways of Looking Into the Vortex

Now she sits at a small plain patio just outside her studio, a cool, dark walk from the dorms.  Cement, cracked and damp with yesterday’s rain.  An old wrought iron and table set, black paint peeling but not yet rusting, holds her body as well as her coffee mug.  Her spirit is tugging at the leash, smells earth, grass, thistle, pollen from a dozen sources, hears Blue Jay, warbler, swallow.  She draws on her coffee like a cigarette.  Exhales caffeine.

The highway in the distance is a dull reminder of rubber on pavement: The World.  The same way her bed, with its smooth clean sheets, the electricity that filled her room with artificial light before dawn, and the gasping Mr. Coffee in the kitchen, reminded her.  She is under no delusions of edenic seclusion or escape. But she doesn’t have to turn on the news.  Doesn’t need to hear stories about savage loss, grief that cannot be captured and subdued, humanity stripped by those who have already given up their own.

No.  She’d rather focus on the three nearly perfect drops of water, three sisters made of dew, that have collected themselves exactly in the center of the back rod of a wrought iron chair.  Hang there full of light and birdsong.

She’s found a pocket of green thistles that haven’t hit August heat yet, haven’t burst out in purple finale like the last statement on a fireworks display:

The tin roof of a barn building.  The gray cement blocks of a studio wall.  The flash of all-out-every-single-wing-span white bars on a mockingbird’s feathers, seen from beneath, against a pale turquoise sky scudded with morning clouds.

She is building beauty here, storing grace.  Hopes to bring some of it back with her across the divide.

Like those three jewels of water still hanging, she doesn’t know how long she’s got before gravity or evaporation pulls everything in another direction.

Just for this window of grace, catch light.  Hold it, reflect it.  Revel in it.

The moon continues her descent, rotating out of the scene like a dancer who cherishes her role.  Stars and planets keep the slow waltz across the sky unseen, know that holding their places is crucial to the choreographic whole.  The throaty clutch and croak of crows as they make their slow way across a field, hop from bush to dead tree branch to grassy clearing.  A thin weave of cricket voices rises up, holds this morning together.

A fiery star burns through the greenery, joins the three pearly sisters glowing on iron, and for a moment, the sacred number blesses all with memory of what really is real.  There is North, and South, and West, and East.  What else do I need to know? she asks.

The Blessings of Surprise (and Endurance) 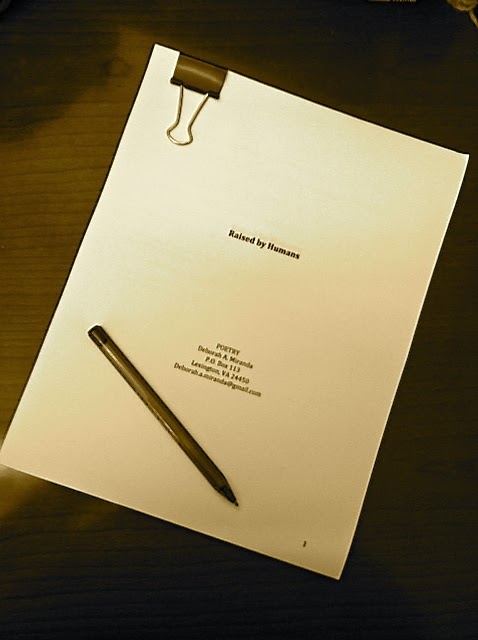 I've had a poetry manuscript kicking around for, oh, maybe 8 years now.  It's gone through several name changes, undergone major renovations at least three times, and has been submitted to publishers and contests a total of 23 times.  Only one press responded with any kind of feedback.  Trust me, this is not unusual for poetry manuscripts!

Last year, at the AWP conference, I took hard copies of the manuscript with me, determined to overcome my fear of being pushy and give it to as many editors as would take it.

Honestly, I don't remember how many editors or small press publishers I gave that manuscript to last year (two?  three?), but I never heard back from any of them.  I continued submitting the book, but more significantly, in the spirit of humility, sat down at the beginning of my summer break and completely revisioned the manuscript.

I mean, I was brutal.

One of the best things I did?  I cleared off the dining room table and said, "Three piles:  awesome, potential, crap."  And then I sorted the poems from my manuscript.  I listened to my inner voice - not my editor, not my critic, but my gut instinct.  And I winnowed according to that voice.

Because I knew.  I knew some poems weren't pulling their weight, and I just had not yanked them yet.  Whether from pride, lack of energy, or sheer stupidity, that manuscript was not the best manuscript I had in me.

When I finished, I had something much better.  I went to work on the "potentially good" poems with a vengeance.  Then I sharpened the "awesome" poems, because I saw them with a clarity that wasn't possible before.  I dumped most of the "crap" poems except for one or two, which I performed some machete magic on, and reworked into material that surprised (but pleased) me.  Finally, I went through my file of newer poems that had never been in the manuscript and found homes for the best of them in the three sections that had evolved from this exercise.

Then I put it all away and worked on other things for a month.  I wanted to come back to it fresh, one more time.

Guess what?  This week, out of the blue, I received a surprise email.  One of those small press publishers from last spring had hung onto my older manuscript, and wrote to me this week saying, "I'd love to publish this."

I had to tell him, "Well, um, it's kinda not the same book anymore," and bless his heart, Luis Rodriguez of Tia Chucha Press wrote back, "I'm committed to this book, so don't worry about that. I'm positive the manuscript will be even better."

(Tangential point:  in 1994, when my father asked, "So what kind of stuff are you doing in grad school?" I gave him two of the most powerful books I'd read; he kept, read and re-read, those books, and he told me, "Now these are my kind of books!"  Those books were Greg Sarris's Mabel McKay: Weaving the Dream, and . . . Always Running: La Vida Loca/Gang Days in L.A., by Luis Rodriguez.)

So, after 24 hours of furious polishing (important addendum: and giving the whole thing to my wife Margo Solod, who helped sequence the poems, make a few excellent suggestions about a poem that was troubling me, and generally earn my undying gratitude), I sent the new/old manuscript off.  A contract came by return email.  Along with a tentative publication date of just before the next AWP (April 8-10, 2015).  Eight months.  This is unheard of; writers wait years for publication most of the time.

Add to this, the gift of being told to choose an image for the cover (this is one of the perks of small press publishing - more authorial control, less anonymous machinery).

So today I am happy to present to you a brief preview of what Raised By Humans (Tia Chucha Press, 2015) will look like.

COVER
The cover design will be based on this collage piece by Yaqui poet/writer/artist Anita Endrezze.  For years I have been looking at Anita's artwork online and drooling over it, wanting to have a piece of hers grace the cover of one of my books.  I can't believe it's happening, but it is!  I found a piece that fits the book perfectly: