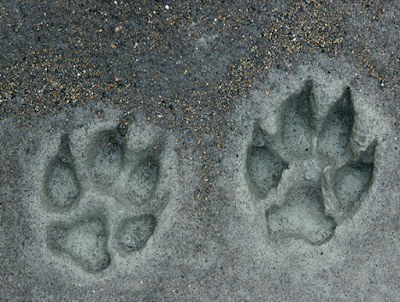 It's been Pride week on our campus all week - lots of activities, and small rainbow flags planted along the walkways in various places. On Thursday I noticed that a bunch of them had been torn up and thrown onto the ground, some of them into bushes, and the "poles" (plastic straws) ground into the bricks and splintered. Angry, I wrote a short blog about it, and online, challenged faculty and students to repair the damage. The good news? A few people did.

It's also been the week of pipe bombs mailed to high-profile Democrats. Every day. Wave after wave.

And a Black man, a Black woman, shot outside a grocery store while a white man is given a pass.

Friday, the KKK came onto our campus and dropped a bunch of their fun flyers, this time including graphics of exactly who is human and who isn't, along with a recruitment offer and contact info for anyone interested.

Today, Pittsburgh. Shabbat services, a baby boy's bris (circumcision), and 11 dead by a hate-filled man with way too much firepower.

All week I've been coming home wiped out from some bug I've had, and sleeping a lot.

Today I alternated doing laundry, errands, cleaning out closets. I felt like I had to keep moving. Finally I lay down with Margo and we napped. I'd been awake till 3 a.m. the night before, wondering (among other things) how long it would be before we get targeted, personally.

Tomorrow evening there will be a gathering at W&L in support of, well, everyone.  I'll go.  I'll go for the students who are hurting, and because I know it will do me good to be with other people. But at the same time, the University always does this - a vigil, a gathering, and then - continues the same bizarre traditions that encourage all kinds of bias and violence.

I've never felt safe holding Margo's hand in town, but since we returned from Provincetown this summer, where we reveled in that luxury, we've tried to keep it up whenever we walk together. As lesbians, as a Jew and an Indigenous woman, I've always felt like we have targets on our backs. I'm thinking about whether or not we'll continue trying that, and find myself shaking my head.

Here's the really creepy thing I haven't told anyone.  I think I saw those guys, the KKK guys, on campus on Friday. I was walking back from my morning class to Payne Hall, and I saw two men holding plastic baggies with paper inside, walking around Payne. They saw me, and just kept looking up at the roofline and eaves, as if they were studying architecture.  I thought maybe they were contractors, there to do some work. Maybe they were. Maybe they had just found the flyers and were trying to figure out where they came from. The flyers (inside ziploc bags with birdseed, to keep them from blowing away), were distributed during the day, during classes.  I didn't hear about it until I'd been home a few hours.

Nothing comes without a fight. I know that. Jews, Indians, lgbtq, immigrants.  We don't get to quit just because it's hard. We can't not be who we are -- although the stress has driven many to pass as Christian, white, straight. That path comes with its own burdens. I know.

My Literature of Poverty course spent this week reading Stephen Graham Jones' book Mongrels.  Jones is Blackfeet, and his genre is horror.  Mongrels is an allegorical story about contemporary werewolves, who are Indians, of course.  My students are fascinated. They love peeling away the layers of allegory, explaining "this means this, this stands for that."  Some of it, you'd have to be Indian to understand; some is clear. My Black and Asian students smile when I explain the scene in which the school janitor looks up, gives the narrator and his aunt "the nod."

Then my students get to the one unmovable fact that they think cannot be unpacked: the fact that the werewolves can pass as human most of the time, but have the ability - sometimes the need - to transform into something inhuman, something hungry, something untamable. Something with super powers of strength, speed, and the power to slash. The students don't know what to do with that information. They are on the werewolves' side, you see. They are Team Werewolf. But they can't abide or come to terms with this core part of werewolf identity.

Most of the time, SGJ's contemporary werewolves only kill humans in self-defence, or because they are starving. Flat-out hunting humans for meat is one of those things they can't do like they did in the old days, the grandpa says. So they hold minimum wage jobs, work under the table, steal social security numbers, live in trailers or their cars, hunt deer and small animals, buy a lot of cheap meat. They move around a lot, because invariably, something goes wrong and they have to flee.  Sometimes there are clashes with law enforcement that don't end well for the officer. Sometimes, a werewolf ends up roadkill on a freeway, or just another naked drifter's remains found in a ditch.

The narrator, a young werewolf boy who has not yet had his first "transformation," says wouldn't it be easier if people just hung a live chicken from their mailbox once a week, so the werewolves could simply scoop them up and be off, rather than having to hunt down domesticated animals, or people?  Help us out, he thinks, and then we could be who we are without resorting to stealing and violence in the name of self-defense.

"It's like the world wants us to be monsters," he thinks at one point, "like it won't let us live the way normal citizens do."

It's that core identity that can't be changed.  We cannot not be who we are: Werewolves. Indians. Queers.  Jews.  And to be clear, who we are is not a curse.  The curse is those who hunt us, fear us, see us as zombies, monsters, the manifestation of whatever is actually threatening their lives.

We must keep repeating that to ourselves. I am not the curse. I have been trying to believe that for a long time. The pressure of self-loathing becomes real when that is what surrounds us day after day.

What do you do when the thing about yourself that you cannot change is the very thing that the world around you hates?

Go mad, I think.  For many people, madness; or else a permanent state of rage (and that rage is different from righteous anger, the kind "loaded with information and energy" which Audre Lorde highlights as one of our strengths). Or self-hatred.

We always have a choice to choose love, too.

Even a queer Jew-Indian Werewolf.

The monsters in the world are fear, greed, hate.  Sometimes these forces possess the bodies of human beings. What are we to do? 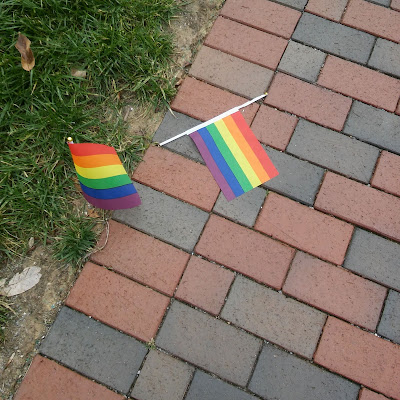 Yesterday I sat on a bench and counted the number of mini rainbow flags torn out of the ground and tossed onto red bricks, ground under foot traffic of students, ignored by passersby.

I wondered how many of those busy folks might be lesbian, or gay, how many might one day seek their true bodies, how many averted their eyes so as not to be identified.

Wondered how many of them call themselves compassionate, kind; how many came from homes with a plaque reading, "Do unto others..."

I wondered how many of them might have already kicked a flag over.

I sat on a bench in late October sun while administrators and faculty walked past, eyes and minds on other important things.

Light from the sun, I know, boosts serotonin in the brain, feeds the body vitamin D, strengthens bones, heals the skin of eczema, cures jaundice. But all I felt was anger, unfolding like a fall crocus, like a field of fall crocuses whose bulbs were planted years ago and multiply each season, crowded and lovely in their yellow fire.

I wrote my anger down, sent it out into the world, where many responded with angry faces, but only a few from my own university.

And then, I tucked my anger away into the appropriate corner of my soul, walked home to my wife.

It was a long dream, but I never put my hand on it, that tube with the designer label in a font called American Typewriter:  “Whiteface.”

Something there is that doesn't love a disguise.