"Walking the Chupacabra": Spontaneous Writing Prompts from the Edge 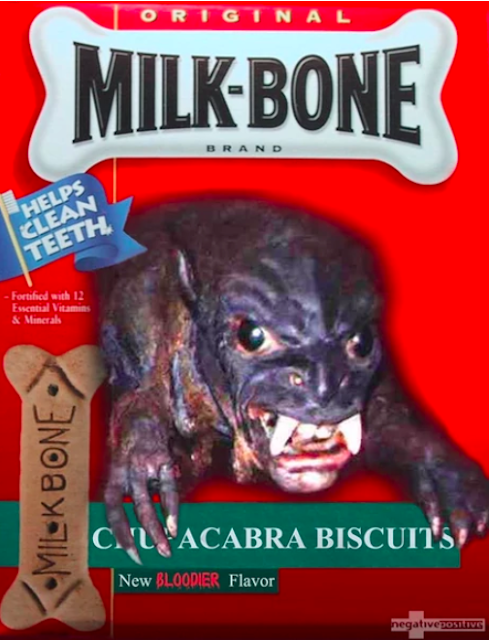 I've always been a fan of writing prompts, but my all-time favorite ones come about spontaneously, when everyday language or a phrase overheard in a passing conversation, or a misread headline, goes just a bit astray.  Language-play disrupts my predictable patterns of thought, my internal editorial demon; it encourages wild and unique connections precisely because I am no longer in charge; instead, language is the boss.

If a phrase would work for one or two of those things, we're tickled, but if it happens to score for all three, it's a verbal hat trick.

This is the kind of word-weirdness that reminds us why we're together; nobody else is strange enough to tolerate, let alone enjoy and perpetuate, this reckless enjoyment of the English language.

For example, we recently, acquired a new member of the family, a rescue dog named, inexplicably, StevieNicks! (Margo insists that it's all one name, and the emphasis is on the second half, with a move to the upper register. Don't ask.)

StevieNicks! is a smallish (55 pounds - small to a woman whose past dogs have tipped the scales at 125 lbs), black German Shepherd/Mallinois mix with severe food allergies and the personality of a perpetually delighted puppy. At four years old, she still races around with a ping-pong ball trajectory, does not have a linear bone in her body; she’s on the skinny side, and a bit moth-eaten from hair loss (although two months worth of an allergy-free diet, antibiotics and great veterinary care are having a wonderful effect). She's got gigantic satellite dish ears, a loooong face, and Big Bad Wolf teeth.  She also has hip dysplasia, a Shepherd trait, so her gait is usually a graceful lope, but sometimes crow-hoppy in the back end when going uphill.  For her diminutive size, StevieNicks! has a tremendously scary, full-throated bark, and she's not afraid to use it.

Because of her ferocity, her scruffy appearance, her rangy legs, her sharp white teeth, her loooong snout, and her big bat ears, I started calling StevieNicks! "the chupacabra."  [If you need an explanation, follow that link.]  One morning last week, I asked Margo, "Are you walking the chupacabra?"

There was that beat of silence that happens when word-magic has been made.  We looked at each other.  Walking the Chupacabra.  "Ohhhh," I said, "that is a beautiful poem title. But I don't think it's mine. Hmmmm... I want someone to write it, though ..."

I ended up posting it on Facebook, to any poet/writer friends.  An offering, I said, to someone who felt the same strange electric thrill at the sound of those three words spoken together, but had more poetry mojo at the moment than me.

That's how this kind of poetry prompt works: it's not official, not given to you in a classroom or as an assignment.  It doesn't appear in a how-to book. It comes from the slippage of regular conversation, or a sign seen out of the corner of your eye; it comes from the blurry edges of standard language.

The blur, the edges: that's where the magic happens.

Here are the three poems I received back from three people who felt it, and responded.  They let language take the reins, and then – like all good poets – stepped in with expertise and craft to support the initial spark.

My thanks to Minal, Ire’ne, and Margo!

We are walking the chupacabra
in the morning. Every morning
we check his Twitter to see what bile
he’s spewed, we check the orange rug
to see what we need to clean up,
put down, burn off, weep around.
We count the goats
to see if they are safe.
We clean the blood & tears
off our sustainable
bamboo floor. El chupacabra
hisses, rubs the thorns
along his spine all over
the house, shredding
the leather couch. Afternoons
he likes to lie in the sun,
tongue lolling as he licks up smog
from the breasts of the skies.
This is when we sleep,
huddled up against the wall
through the rough comfort
of his snores. When the sun sets
el chupacabra runs
to the red horizon.
We hear his howls
all night long, clamoring
for flesh.  We answer—
fire in our bowels, fire in our lungs,
fire in our hearts—for we are
exploding with love for our people
through the long war
knowing one day we will prevail
& make the beast ours.

We always walk at night (as though
darkness could hide her trembling anticipation).
She waits for me by the gate, breath hoary,
starlight glinting off daggered teeth.

Darkness hides her trembling anticipation.
Shadows shapeshift into monsters,
starlight glinting off daggered teeth
(what holds the ends of their leashes?)

Shadows shift shapes into monsters.
Every woman has a chupacabra locked away
or at the end of a leash she clings to -
perhaps we should arrange play dates.

Every woman has a chupacabra, locked away
in a midnight corner of her mind.
Perhaps I could arrange a playdate
with a woman willing to release hers.

In the indigo corners of a mind,
or on a hand-knotted living room rug,
a woman willing to release hers
is a treasure not to be discarded.

A hand-knotted living room rug
woven from rags by my grandmother
is a treasure not to be discarded,
a saddle blanket for her own chupacabra.

Woven from rags by my grandmother,
my chupacabra is never cold -
no saddle blanket for her,
black fur glistening in moonlight.

My chupacabra is never cold
waiting for me by the gate, breath hoary,
black fur glistening in the moonlight.
We always walk at night.