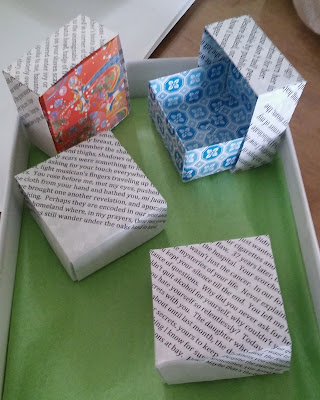 During times of loss, it's hard to find a way to express what is inexpressible - whether that's the end of a relationship, a wound from a betrayal, or a death.  Separations, partings, departures - in my own life, I've accumulated a lot of them, and in most cases, never got the chance to properly say good-bye, or make sense of the good-bye that I received from someone else.

Poetry has served me well for many years, acting as a kind of container that I get to shape, in just the way I want to shape, my grief.

But sometimes - as much of a ceremony as writing, revising, and occasionally publishing that poetry can be, sometimes - I just need more.

Right now I'm experiencing a kind of loss that, in the grand scheme of things, isn't the end of the world, but still acts as a catalyst for all those other doors into old pain to fly open.  It's one of the injustices of the Universe that for some of us, one loss can open up a can of grief-worms that just go flying all over, as if they own the place.  Unexpected losses, the kind you have no time to prepare for, are surprisingly fierce.  Saying goodbye to someone whose work has helped me process many a trauma has acted as a reminder to me that I still carry around a lot of baggage that pokes and stings me in ways I no longer find useful.

Crafting something physical to hold these old pains has become a part of this farewell.  I've never been good at good-bye - a word I've experienced as more of a curse than the blessing ("God be with ye") of its original meaning.  This should come as no revelation to those who know me.  But maybe I can learn something from this particular goodbye; that is, how to say goodbye, how to do goodbye, so that it is not uncontrolled devastation.  And, looking back at some apocalyptic good-byes in my life, in some cases good-bye was good riddance; owning that, too, is something I've had difficulty admitting.

So I began this project, Elegy Boxes.  It isn't finished yet, but it's coming along.  It's been such a positive experience, though, that I want to share it with those who might also crave a construction project made from grief.

The basics are simple enough: start with about 500 written words, the core of a loss, written down.  Simple?  This part cost me some blood, sweat and tears; a little extra therapy time; and brutal (yet crucial) honesty.  In the end, I knew when I was finished with each piece; you will, too.  Mine are focused on individuals with whom I did not get to say good-bye, or with whom I did not "do" good-bye very well (I suck at good-byes; okay, okay, in all fairness, no one ever taught me!).  I call them "elegies" based loosely on the poetic form; nothing here is by-the-book, in case you haven't guessed yet.

Next, I typed the text into my computer, and printed it on the back of one-sided origami paper (you can play with font, size, colors ... right now, I am doing pretty basic stuff - triage, you might say).

The secret to printing on thin origami paper?  Print out your text on regular printer paper first, utilizing margin tools to create a "box" of text that will fit on the origami square.  I eyeballed it at first so I had someplace to start.  (People better at math than I am could probably figure out how to do this without a test print.)  As a test, hold the printing paper up to a light, and layer the piece of origami paper over it; you'll see immediately if the type would go off an edge).  Then, tape the piece of origami paper - plain side up - directly over the printed out text (I do this to make absolutely sure that the text fits).  Use tiny pieces of scotch tape, and don't press too hard.  I find that just two little pieces, at the top corners of the origami paper, is plenty.  Determine which side of a piece of paper your printer prints on; most ink-jets use the reverse side of the paper in your paper tray, so put the now-united two sheets of paper face down in the tray.

Hit "print."  The sheet feeds smoothly into your printer and out comes the poem, now printed on the back of your origami paper.

Gently, gently pull off the scotch tape.  It might take awhile to get the hang of this without tearing your origami paper, but it can be done; another good exercise in patience!

Now you've got the material for the outside of your box (or the inside, whichever you choose).  Follow the directions for a basic origami box.  I chose to put my text on the outside of the box.  Play with this; maybe you want your text on the inside, where no one else can see it.  Want a second, smaller box to fit inside the first, so that your text is completely enclosed, or so you can put mementos or sage inside?  For me, cutting off 1/4" of a second piece of origami on only two of the sides gives me a smaller square just the right size to make a second box that fits inside the first box.

Now that I've started this project, it's become a mindful, yet intense, good-bye ceremony for me.  After walking around in a bit of a heart-broken daze for two weeks, now I feel focused and forward-thinking again.  Rather than sucking up my energy and time in formless mourning, my grief has found a way of making itself a home just far enough outside of my body to let it go ... a little bit at a time.

I was confident that I couldn't be the first person to think of using origami for something like this, or for poetry in general, and sure enough, I've found a few other like-minded projects online.  I especially like "Poetry Boxes" by poet Amy Miller, which is a different kind of box altogether; and Origami Poems Project, which uses a form of one-page book that I learned 25 years ago in my daughter's kindergarten classroom, taken to a whole new level!

I'm sure there's more out there; letter-press printers, especially, are good at thinking this stuff up.  If you try your own Elegy Box, send me a picture.  The innovations possible are infinite.

What to do with Elegy Boxes?  I have my own little ceremony planned.  Let's just say it involves sage, flame, and a certain fire pit in the center of four great oaks.  Use your imagination!

Certainly, good-byes are all unique, and saying good-bye is much more of an art form than I ever imagined.  The important thing is to say it: say goodbye in your own good time, in your own way, so that good-bye is a blessing for both you, and the person or event to whom you want to bid a heart-felt fare-well. 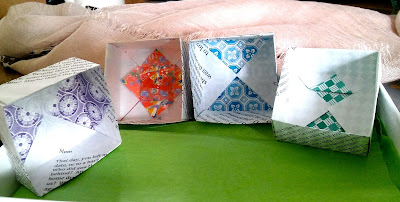 Posted by Deborah A. Miranda at 2:29 PM No comments:

After the Anti-Racism Rally