Split This Rock: My First Time

They call the California Missions the “21 beads of the mission rosary.”  They call this road El Camino Real.

What would these missions say, if they could speak?  What would I ask them, if they would answer?

Were you complicit in war crimes?  Or were you, too, victims of Spanish colonial greed and conquest?  What skeletons did you tuck away in those adobe walls?  What is your secret name?

Some missions give me an alias, an alibi.
Some missions confess as if I were their priest.
Some spit at me for my pagan ways.
One mission, national landmark, wanted me to burn her down.
Some deny any knowledge of floggings, rapes, angry neophytes who torched fields.
Some missions have committed suicide, leave me only a brief note.
Some missions swell fat with lies manufactured for profit by Disney.

I listen, but it’s not easy.  Sometimes I don’t like what I hear.  Sometimes I cry.
I offer tobacco.  Sage.  Mugwort.
I offer poems, prayers.
I offer my blistered feet, promises made of sweat.
I sit in the shade of two hundred year old olive trees, wear the stains of their black fruit on my skin and clothing.
I run my fingers beneath the breathless music of twenty-one fountains afraid of drought.
I taste the bruised sweet flesh of fig trees whose roots clenched around memory like a club.

Beneath the missions, our homeland stirs.  Beneath this unhealed scar running up the side of my homeland, I follow the tracks of a time-traveling coyote. 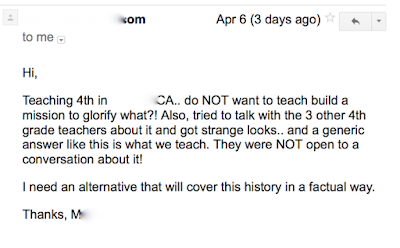 I happened to look in my spam folder this morning, and found this cry for help waiting in limbo.  I quickly pulled it out and wrote back.  Thought I'd post them both here, as it's THAT time of the year and I'm getting a lot of these kinds of notes from frustrated and distraught teachers and parents.

Here's how I responded:

Your note ended up in my spam folder for some reason.  I just wanted to tell you that this is an ongoing battle!  Not sure how you found my email, but if you haven't yet read my blog piece about this, try that: http://whenturtlesfly.blogspot.com/2009/12/4th-grade-california-mission-projects.html

The comments on that particular post have some good ideas from both parents and teachers.

Here are a few more ideas:

1.  Many 4th grade teachers allow students to do research on the tribes that were taken into the missions.  A report on this tribe is the alternative to the actual mission report.

2.  An alternative to the mission model might be creating a topographical map of Indian territories in the state, or just in your county (seeing the state filled with Indigenous names and territories is an awe-some experience for Californian kids used to seeing cities and freeways); or a display of photos of Indian baskets, jewelry, clothing over time - it's fun to do a "then and now" comparison, since children often don't realize California Indians today also dress in jeans, Lakers sweatshirts and sunglasses!

3.  Try googling for the tribe nearest you and email a contact person to see if they have any members who do classroom visits.

4.  A Timeline of California Indian History:  By researching the tribes from pre-contact to the present, students learn that many California Indian tribal peoples are still here, still practicing our culture, and human just like them.  Many kids think California Indians are all dead - I nearly scared one young girl to death at Mission Dolores once!  The visual effect of a long scroll-timeline is powerful, especially if students make it multi-media (photos, maps, charts, drawings): you can wrap it around the room, and students can walk along to see major events - including the arrival of the Spanish, Mexican, and Americans and, most importantly, on into the present - and their research can include often erased facts such as population dives, loss of languages, recuperation of languages, important court cases about land, establishment of California Indian Basket Weavers, California Indian Conference, etc.

5.  Simply educating yourself about what the doublespeak on mission websites really means can be helpful.  For example, the "monjerio," the room where single Indian women and girls were kept at night, is often explained to children as simply "the women's quarters."  The fact that women and girls were LOCKED UP in this room against their wills, that it was dark, smelly, had pits for toilets, was full of germs, and kept little girls away from their mothers at night, is never spoken of.  YOU can teach the children how to read critically, question the websites they read, and search for more honest information.

6.  I have a letter to 4th graders on my newer blog that might be helpful, too.  Feel free to use it.  http://badndns.blogspot.com/2015/12/dear-sierra-open-letter-to-california.html

Alternatives to 4th grade mission projects tend to take a lot of work, which is partly why it's hard to get educators to change their lesson plans (that, and many simply don't realize that they aren't teaching truthful history - mis-education perpetuating mis-education).  There isn't an actual alternative curriculum available yet though several groups are working to get them accepted. For now, focus on learning the truth and translating that is often the best thing you can for your students.  Letting them know that there ARE other truths out there is a great first step, especially if you are just realizing what the missions are about and don't have time to plan for this year - there's always next year, and since you are IN California, you can actually layer mini-lessons in all year long.

Many thanks for your concern, and please, let me know if you come up with something new that I can add to my still in-progress list ...

Note to all: If you have more suggestions, PLEASE write into the comments with them.  I'll keep a list and update it for this blog.  Also, if any of the curricula in progress have actually been made available, please let me know that too, and sources to give.  Many thanks, all.

And I'll leave you with this: "Gabe's 4th Grade Project" - Huwa!  Thanks to Vincent Medina and News from Native California. 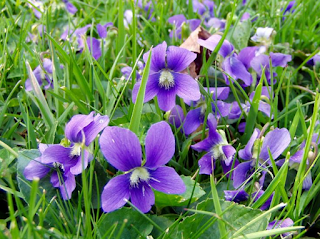 Here at W & L, we have three more days until the end of classes; finals week follows that, and then Spring Break.

Just about everyone I see here is sleep-deprived, overwhelmed, and bogged down in professional, personal and world drama.  I'm counting myself as one of those people.

As I walk to school in the biting wind beneath a promising sun, each step feels like one step too many.  I keep tripping on Lexington's famous bricks.  I'm kicking myself for falling back into depression after a wonderful reunion with family over the weekend.  Why am I so bad at dealing with life?  I argue with myself about the best way to deal with my exhaustion:  count my blessings, admire the wild violets in uncut grass (they'll be gone once the lawnmowers move in), make another, better, "to do" list?

I even stop at a cafe to pick up a cup of chai, a rare treat in these diabetic days.  There, I run into a local pastor who tells me a funny story about some bizarre selection of songs he heard at an earlier gathering, and when I laugh at the story and the pastor's wry, puzzled expression as he tells it, I surprise myself.  I didn't realize I had a laugh in me.

As I walk back out into the street, I remember this story:


No matter how many times I remind myself not to loose that second arrow, the one where I berate myself for being slow, tired, overwhelmed, inadequate or simply bad at adulting ... I do it anyway.  I guess what I should praise myself for is not going on to the third arrow??


Anyway, as we trudge toward the end of this semester, enduring wacky spring weather, meetings, political doomsday, and whatever personal demons are at work ... I'll keep working at catching that second arrow before I release it.  This does not come easy to me.  I think it's important to note that it is much harder for survivors of trauma (that first arrow) - and this group most frequently includes people of color, LGBTQ, low-income and women's communities - to overcome deeply ingrained narratives of blame and guilt.  And being a "survivor" doesn't mean we've left those moments of trauma in the distant past.  It means we're always already survivors, walking through racism, sexism, micro and macro aggressions ALL. DAY. LONG.  When is there time to recuperate?  When is there a place to take refuge?

I'm glossing over huge things here.  Probably because I'm too tired and busy to dive into the places this post could go if I let it.  Some of this, I simply don't have language for yet.  But I want to try.

Little moments of joy do happen.  Maybe it's just a good laugh.  Maybe it's knowing, really knowing for sure, for one fierce moment, that we are loved or protected or cherished.  Time isn't linear.  I'm learning to return to those moments and let them feed me when my soul is starving.  And sometimes there are little gifts, like this morning's violets.

Another reason why that second arrow really isn't necessary.  I'll keep reminding myself.  Again and again and again.  Like those wild violets: persistent, resistant, tenacious little suckers. No wonder I love them so much.