The Language of Truth 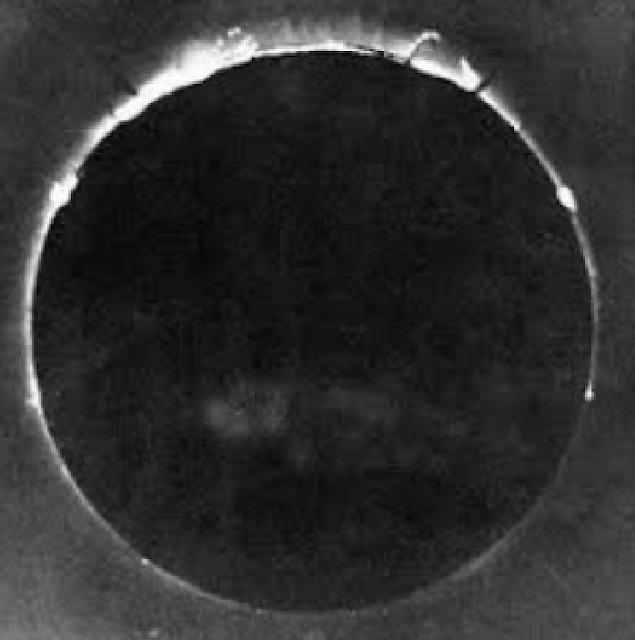 In 1769, the arrival of two Spanish ships in Alta California coincided with a total eclipse of the sun, in conjunction with the shock of a powerful earthquake. "So it seemed," wrote Junipero Serra in his diary, "that the insensible things of earth and heaven had in this way manifested themselves in the new conquests as heralds and advents to the benighted gentiles, to incline their hearts to receive the truths of the gospel, proclaimed by the ministers of the living God."

The giant snakes stirred inside earth, struck
a few hours after dawn.  Thrown down
on our faces, we cried out – rocks thrust
upward, a fearsome roar rattled our ears –
how our Mother writhes! Then Sun, source
of life, disappeared mid-day, covered
by Moon’s broad face; star-beings shown
like abalone shell in sudden night.
Our star-mapmaker offered fervent prayer
to each sovereign direction, brought light
creeping back, though it felt a lifetime
till we breathed balance again.

We were wary, therefore, when a ship –
bigger than a whale – came over the horizon,
and men, more corpses than living bodies,
crawled from floating grave to shore.  Pale
skins, hairy faces, blue-eyed, green-eyed,
brown-eyed, they died and died. The sands
where their white tents stood stank of death.
Did they not know how to catch fish?
Did they not know to seek out berries,
heavy on the bush?  Did they offend
their gods, or travel beyond the reach
of their gods?

Another ship arrived, pale but abler men
who buried and buried; then men on foot,
strange gray deer bearing burdens of food
and hard heavy tools smooth as stone, sharp
as our best obsidian. When the beasts lay down,
too exhausted to carry any more, the pale men
beat them. It did not make the animals rise.
In the morning, some men raised up barren
prayer trees; others in long skirts chanted
ugly foreign words, hands waving bowls
of smoke, meaningless gestures in the air.

Was it the end of the world?  Now,
I wonder we did not hear these warnings
more clearly. Some of us broke traditions
of welcome; the law of sharing food, shelter,
story. Where once we would have brought
baskets of meat and sweet dried cherries,
now we drove off the pale men, their strange
stupid animals not-deer, not-elk.  Vacas.
We drove them all to the north. Some of us
said that was not far enough. Now,
I do not think any distance could spare us
the evil that followed. Earth spoke to us!
Sun and moon warned us!  We did not heed.
Now, we die of disease in their missions,
our blistered bodies weeping pus; women
and children mere vessels of rape and rage.
Perhaps the pale men killed their all wives;
none came with them.  Perhaps their women
revolted, exiled the pale men here,
and somewhere, on an island across the sea,
those wise women live peaceful, free.

We cannot see the sun of our next
generation. We cannot feel the earth
of our Ancestors beneath our bloody bodies.
We did not listen well enough. At night,
or behind trees in daytime, in fields
of strange crops, beneath blows from leather
cat o’ nine tails, we pray: let enough of us
live to tell this story. We will memorize it
in our hearts, trembling in awe. Let us live;
we will teach it to our children forever.
If we live, we will heed our Mother's
thunderous voice: Her dark language never lies.


“Bad Indians ... is such a fine book that a few words can’t do it justice.” —Leslie Marmon Silko, author of Ceremony and The Turquoise Ledge