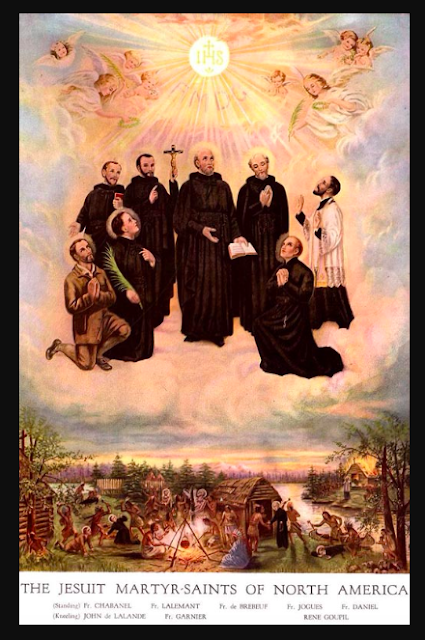 THIS article by Julia Corderoy gives us the real story: not the 'murder' of a 'missionary,' but the anger and self-defensive actions by a traumatized indigenous people he refused to respect. I'm talking about John Chau, a 27-year old United Statesian who basically committed suicide-by-Indigenous people just before Thanksgiving.

As the article states, Chau was killed "by the islanders [on North Sentinel Island, in the Bay of Bengal], after he illegally paid fishermen to take him there in a bizarre plan to convert them to Christianity."

The Sentinelese (not their own name for themselves) live on this island protected by the country of India; no contact by outsiders is allowed, with boat and air patrols enforcing a 5-mile distance from land. This sovereignty has been enforced in large part after early contact in the late 1890s resulted in the kidnapping of islanders by a curious British naval officer named Maurice Vidal Portman.

As Corderoy writes, Portman "took the islanders to a British-run prison on a larger island where he watched the adults grow sick and die." At that point, Portman returned the children to the island - creating who knows what kind of contamination from western illnesses, as well as a handful of traumatized children with a story that must have been of an incomprehensible terror.

Corderoy suggests that this incident set the scene for the islander's deep suspicion of outsiders, and it's not hard for me to imagine that initial encounter becoming part of an oral tradition chronicling absolute terror. Eventually, India passed a law protecting the tribespeople, allowing them to continue their way of life as they desired.

Chau knew he was breaking that law, but felt he was obeying a higher law -- something missionaries have long claimed to excuse their legal and ethical law-breaking.

Another sad part of the story is that this man was mixed-race (in another article, a diary excerpt by Chau claimed he was "an American citizen, part Irish, part Native American and part African and part Chinese and South East Asian").  In other words, Chau came from a family with histories that include earlier colonization by Christian missionaries - the Irish, Native American and African strands, certainly; by adulthood, he was thoroughly indoctrinated in evangelical proselytizing from a childhood and adolescence steeped in an ideology that dictates the inferiority of indigenous spiritual beliefs. He graduated from Oral Roberts University in Tulsa, Oklahoma, a well-known conservative private institution whose vision statement reads in part, "founded in the fires of evangelism and upon the unchanging precepts of the Bible."

I feel deep pity for a boy whose spiritual leaders not only led him astray and to his death, but who did not, in the least, prepare him for the realities of the world, or human beings from other cultures. Chau wrote in his journal that he attempted to speak to the tribespeople using a few words of Xhosa (an African language) that he'd picked up. The tribespeople laughed at him, he reported with dismay.

What kind of magical thinking made Chau believe that ANY indigenous language would magically work on ANY indigenous people? For that matter, why did he feel compelled to bring safety pins and scissors as "gifts," or think that yelling "My name is John, I love you and Jesus loves you!" was somehow going to be magically translated into a language the islanders could understand?

What kind of magical thinking turns the invasion of someone else's land and world as "love"?

Magical thinking called evangelical Christianity. And by that, I mean every missionizing form of Christianity; I'm hard-core here. As the descendant of peoples who were genocided by Catholicism as well as greed, I don't cut missionization a lot of slack. It sure didn't cut us any.

Now, those same organizations are calling Chau a Christian martyr. Maybe he is - but not the way they mean it.

To me, John Chau is an example of what the trauma of colonization and missionization can do to people, and how that trauma can create spiritual and psychological damage so devastating that, sometimes, we then turn around and do the same to others.

... which is not to say that I am not enraged by Chau's actions. I'm just enraged for multiply layered reasons. Some of his diary entries reveal such a simplified, narrow worldview that he actually sounds like a brainwashed cult member meeting up with the real world for the first time ever, with no authority figure to filter it for him or protect him from the truth.


“What makes them become this defensive and hostile?”

“I felt some fear but mainly was disappointed. They didn’t accept me right away.”

"Why did a little kid have to shoot me today?"

"Lord, is this island Satan's last stronghold where none have heard or even had the chance to hear your name?"


These comments reveal the shock of someone dealing, for the first time, with autonomous, sovereign, uncolonized human beings. These are the thoughts of an immature, narcissistic person. We often call that privilege. In this case, since it cost him his life, maybe not so much.

...on the other hand, privilege means being able to live without having to acknowledge other people's equal humanity. I'm not sure Chau figured out that these are people with a rich, complete, traumatized, fiercely beloved culture of their own, even at the very end, when they killed him for his ignorance and worse, his lack of respect for their world, their bodies, and their spirits.

I'm thinking of the Spanish Franciscan missionaries killed in California during the missionization era. Theirs, too, was a mindset I can only describe as brainwashed. Intelligent men, determined to the point of obsession, who drank the Kool Aid.

That was a choice. That was their choice.

But the decision to force others to drink that Kool Aid against their wishes?

For some reason, we call that missionization. Proselytizing. Spreading the Good News. Christians have done it by bribery, coercion, force, violence, deception, on the pretence of 'helping' a culture laid low by colonial violence, and/or psychological and physical torture. And yet, missionaries are still surprised when their intended-neophytes strike back.

A tragedy in all directions.

(after viewing the painting, “Jesuit Martyr-Saints of North America”)

The Jesuits do not want to go gentle into their good night
even though it’s the fastest way to martyrdom and halos;
they hold up crucifixes to show they’re in the right.

Those wise men stand firm, let the tomahawk take a bite,
say their prayers at the stake as flames nibble their toes
but they’d rather not go gentle into God’s goodnight.

See, already they ascend into heaven, a glorious sight
treading soft fluffy clouds with their heads all aglow;
already it’s worth it, going so gently into good night.

Brave men far from home, faith your only might
Let go, let God, above all let baptismal waters flow!
Hold up your crucifixes of gold to show you’re in the right

Attend your Father, your angels, look down from new height
Forgive us, we’re savages made simply, from clay.
We refused to go into colonization’s good night.
We gave up our bodies, we’re martyrs too, right?

-- Deborah A. Miranda, Raised by Humans

Below: detail from "The Jesuit Martyr-Saints of North America" (see the entire painting above) 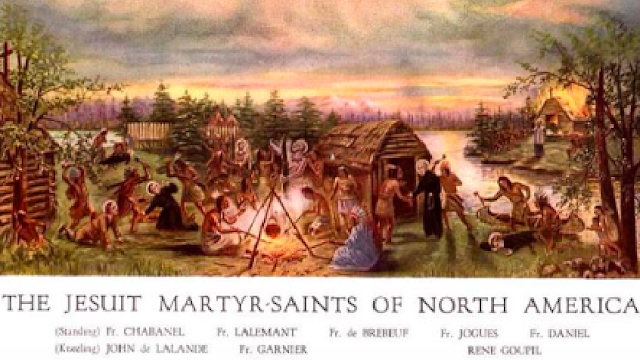